Foreign currency accounting in Spire is designed to satisfy the generally accepted accounting principles in Canada as set out currently by the CPA (Chartered Professional Accountant) standards:

Once foreign currency purchases and sales, or inventories, fixed assets and other non-monetary items obtained through foreign currency transactions have been translated and recorded, any subsequent changes in the exchange rate will not affect those recorded amounts.

Currency set up in Spire

There are three aspects to currency setup in Spire:

This is where currencies are established and configured, and where current and monthly exchange rates are set up.

The highlighted rate is the current rate; click on the Monthly rates to see the historical rates.

These default to Canadian when first set up, but can be changed to one of the currencies established in Edit / Currencies. 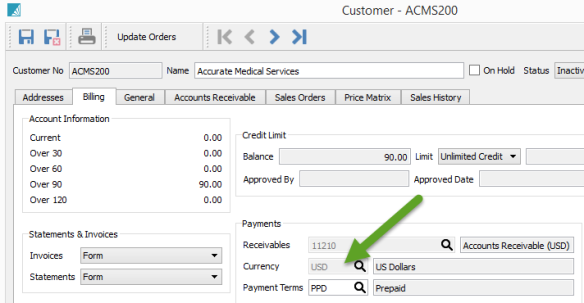 The important balance is the foreign currency balance for accounts denominated in a foreign currency since it is derived from the actual transactions such as sales, cash receipts, purchases and payments. The Canadian balance is merely the calculated equivalent.

GL accounts, in addition to having a currency designation, also have a flag for whether an account is to be revalued or not.

Bank accounts, Accounts Receivable, Accounts Payable and other monetary accounts (US GIC’s, perhaps) should be flagged as ‘Revalue’. All income statement accounts as well as capital asset accounts should not be so flagged. Note that inventory is only maintained in Canadian dollars even though inventory vendors might be from the US or elsewhere.

The revaluation routine only affects those accounts flagged as ‘Revalue’.

The revaluation routine calculates the Canadian dollar equivalent of any foreign balances flagged as ‘Revalue’ using the exchange rate set for the period end date, and then it compares it to the Canadian amount previously calculated. The difference results in an unrealized foreign currency gain or loss; the other side of the journal entry is to the asset account.

To run the revaluation routine, click on the Revalue icon when on the Accounts tab of the General Ledger.

You can revalue individual accounts or all accounts at once; you can revalue for the current date or for any date in the past. Most companies would typically revalue once a month at month end.

Go the GL, Balances tab for a US account. Toggle the currency. Take the US amount, multiply it by the rate for the period; toggle the currency back to Canadian; you should get the Canadian equivalent. 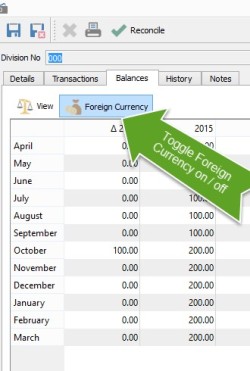 Print the Aged Listing for the month end date. The US and other currencies will have their own sub-totals.

Take the foreign currency total, multiply it by the exchange rate at the end of the period. The total should equal the balance in Canadian dollars for that account.

This document provides a high level view as to the structure of foreign currency transactions in Spire.

Other things to consider include:

Please do not hesitate to contact me for further guidance regarding foreign currency in Spire at rita.bloem@rogers.com.